Philharmonia APA (PAPA), an ensemble made up of the most distinguished recent graduates from HKAPA will perform under the direction of Dr. Sharon Andrea Choa. Born and bred in Hong Kong, Dr. Choa is a renowned conductor, musicologists and educator. She is currently Dean of the School of Music at the HKAPA. They will perform works of Schnittke and Haydn. Ms. Cheng and PAPA will perform Mozart’s Piano Concerto No. 12 in A Major under the baton of Dr. Sharon Choa.

HKGNA is thrilled to present these women masters of the performing arts and the sensational PAPA ensemble. Together, they will inspire audiences and profoundly impact our Hong Kong community! 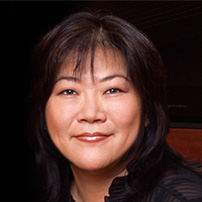 Consistently praised for her brilliant technique, tonal beauty, and superb musicianship, Canadian pianist Angela Cheng is one of her country’s national treasures. In addition to regular guest appearances with virtually every orchestra in Canada, she has performed with the symphonies of Alabama, Annapolis, Colorado, Flint, Houston, Indianapolis, Jacksonville, Saint Louis, San Diego, Syracuse, and Utah, as well as the philharmonic orchestras of Buffalo, Louisiana, London, Minas Gerais/Brazil, and Israel. In June 2016, she returned to Virtuosi Concerts Winnipeg as “Poet of the Piano,” in celebration of their 25th anniversary season.

Angela Cheng’s made her highly acclaimed Carnegie Hall debut with the Edmonton Symphony in the spring of 2012. That summer, she also appeared at the prestigious Salzburg Festival in a recital with Pinchas Zukerman. Her collaborations with Pinchas Zukerman began in 2009, when, at his invitation, she toured both Europe and China as a member of the Zukerman Chamber Players, and as Mr. Zukerman’s collaborative pianist. Subsequent seasons have seen multiple tours of Europe and South America, including performances at the Musikverein in Vienna, the Concertgebouw in Amsterdam, and at the Schleswig-Holstein and Ravinia festivals. During the 2017/2018 season, Ms. Cheng performed with Mr. Zukerman and the Zukerman Trio throughout the U.S., and in Australia, the Canary Islands, Germany, and South America.

An avid recitalist, Ms. Cheng appears regularly on recital series throughout the United States and Canada and has collaborated with numerous chamber ensembles including the Takács, Colorado, and Vogler quartets.

Ms. Cheng has been Gold Medalist of the Arthur Rubinstein International Piano Masters Competition, as well as the first Canadian to win the prestigious Montreal International Piano Competition. Other awards include the Canada Council’s coveted Career Development Grant and the Medal of Excellence for outstanding interpretations of Mozart from the Mozarteum in Salzburg. 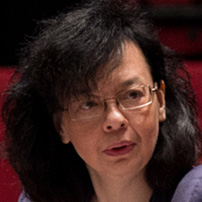 In 2007, Sharon was nominated an ‘inspirational woman of the world’ with her portrait appearing in the National Gallery. Her achievement as musician, conductor and entrepreneur is featured in Zerbanoo Gifford’s book Confessions to a Serial Womaniser). Trained rigorously both as a performer and academic, Sharon possess the intellectual prowess always to seek the deepest meaning, the innermost essence of the composers’ thoughts in her interpretation of musical works. Her mixed ancestry encourages an understanding of the value and strength of cross-cultural ties and interdisciplinary connections in her programming ideas. Sharon’s long years of practising the art of Taiji makes for a physical approach to conducting that focuses on the inner strength of the body and mind. Her premiere of Mahler’s Das Lied von der Erde in Chinese at the 2004 BBC Proms ‘East meets West’ series established her as a conductor of remarkable musical abilities and intensity.

Born in Hong Kong and enjoyed an exceptional Anglo-Chinese education, Sharon excelled in the violin at an early age and first began conducting while still at school at the age of 16. She was later accepted at the Royal Academy of Music as a violinist to study under the great quartet leader Sidney Griller. Sharon also holds a First Class B.Mus. and Ph.D degrees from King’s College London. It was during her studies at King’s that her talent for conducting was rediscovered and led to coaching from the conductors Lawrence Leonard, Diego Masson, Georg Tintner, Janos Fürst, Jiří Bĕlohlávek and Sir Colin Davis. Trained rigorously both in performance and academia, she became Director of Performance and Lecturer in Music at the University of East Anglia (UEA) Norwich in 1996; taking over the UEA Symphony Orchestra as Chief Conductor. Since then, she has taken the orchestra on tour to Germany, Italy, Austria and Moravia as well as guest conducted professional orchestras in Germany, Russia, the Czech Republic and Hong Kong. In 2001, Sharon founded Chamber Orchestra Anglia (COA), a professional ensemble that draws together creative, cultural and academic strengths in the UK. The orchestra has since presented a string of concerts that earned itself a reputation for its innovative programming. Whilst in the U.K. Sharon has been awarded many performance and academic prizes and has been given individual grants by Arts Council England, the British Academy, the Arts and Humanities Research Council and the British Council to further her many musical and entrepreneurial activities. She was awarded the Norfolk Arts Award and the A.R.A.M. (Associate of the Royal Academy of Music) in 2014, the same year when she returned to her birth place, Hong Kong, to take up the position as Dean of the School of Music at the HK Academy for Performing Arts (HKAPA).

In Hong Kong, she guest conducted the HK Philharmonic, and was Principal Guest conductor of the HK New Music Ensemble – taking the ensemble on tour to the Tong Yeong Festival and the Gwangju Festival in Korea, as well as performing in a series of high-profile concerts in Hong Kong. In 2016, she and her colleagues at the HKAPA founded an ensemble made up of the most distinguished graduates from the School of Music. It was named Philharmonia APA (PAPA). Since then, Sharon has taken the ensemble on tour to Vienna, and performed in venues in Hong Kong to considerable acclaim. Sharon is also serving as the chief resident conductor of the APA Symphony Orchestra, performing regularly with the orchestra locally as well as on tour to Taipei, Beijing, and Shenzhen. There are plans in the future to tour Europe. She also conducts the annual composition workshops at APA, giving young student composers the opportunity to hear their works played live and recorded. 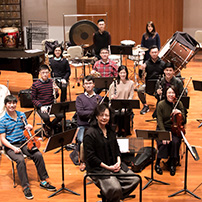 Philharmonia APA (PAPA) is a new ensemble made up of young professionals graduated from The Hong Kong Academy for Performing Arts. The formation of PAPA is inspired by the
distinguished achievements of three decades of music graduates. In HKAPA’s 35th year, PAPA has been formed to continue the high-calibre performances established by APA-trained musicians, and also to unite the network of music graduates and serve the Hong Kong community by contributing to its arts scene.

In two years of growth, PAPA has actively performed in local and international stages. Recent performances include the second invitation to the Hong Kong–Vienna Music Festival in Vienna and the concerti concerts in Altamira Hong Kong International Guitar Symposium and Competition 2017 and 2018.

*Full-time students, citizens aged 60 or above, people with disabilities: 50% off (with quota).

HK Ticketing applies a customer service fee to all tickets purchased via its network. This fee is additional to the face value of the ticket and is payable upon purchase of tickets.